Do you operate out of the UK and need more information about UK Air Passenger Duty?

If yes, then you have come to the right place!

This Ultimate Guide to UK APD answers all your questions - jargon-free, in plain English.

Start with question 1 or jump straight to the question that you are most interested in.

And if you still have any further questions, please fill in the form to your left and we'll get back to you within the next 24 hours.

What is UK APD?

UK Air Passenger Duty (or UK APD) is a head tax levied on passengers departing from a UK airport (*) on board fixed-wing aircraft with a maximum take-off weight (MTOW) of more than 5.7 tonnes (12,500 lbs).

It was first introduced in 1994 to regulate bigger aircraft. Exempted were aircraft not authorized to seat 20 or more passengers, or aircraft with a MTOW of less than 10 tonnes (22,000 lbs).

You should not confound APD with traditional airport charges and fees that you pay your handling agent or the airport operator, such as landing or parking fees.

APD is different in that, unless you are exempt, it is your responsibility to declare and pay the duty in accordance with the Finance Act 1994 and its latest amendments.

The competent authority administering APD is Her Majesty's Revenue and Customs (HMRC).

In 2016, the Scottish Parliament devolved UK APD and, a year later, put legislation in place for the Scottish Air Departure Tax (ADT) to be levied instead of UK APD on passengers departing from Scotland. The new replacement tax has initially been planned to take effect in April 2018. However, the UK and the Scottish Government decided to delay its introduction. To this day, ADT has still not come into force.

* The UK consists of England, Wales, Scotland, and Northern Ireland. Isle of Man and the Channel Islands are not part of the UK.

How Much is UK APD?

The amount of UK APD per passenger depends on aircraft characteristics, seating configuration, class of travel, whether the destination is within or outside of the UK and the geographical distance of the capital city of the destination country /territory from the UK’s capital London.

Destination countries (or territories) are allocated to either the 'domestic' band or band A, B or C. The ‘domestic’ band applies if you fly to destinations in England, Scotland, Wales or Northern Ireland. Band A applies if the distance from London (UK) to the destination country’s capital city is below 2,000 miles. Band A is made up of countries belonging to the European Economic Area (EEA)*, independent regions (such as Channel Islands and Isle of Man), Switzerland, North African countries (except Egypt), Balkan countries, Turkey, Ukraine, Russian Federation (west of the Urals only) and any other country meeting the distance criteria for band A. Band B comprises countries where the distance from London (UK) is between 2,000 and 5,500 miles. And Band C where the distance is over 5,500 miles. 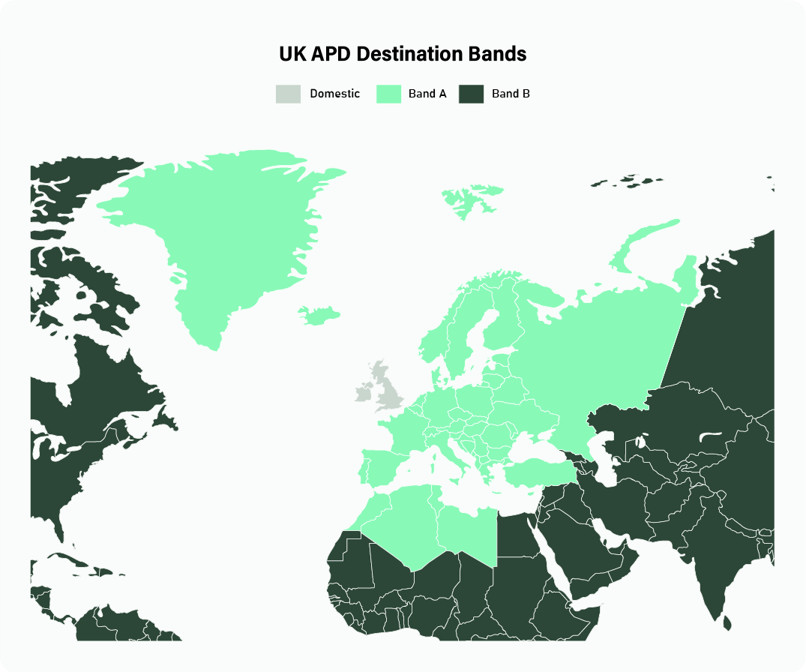 There are 3 rates of duty for each destination band, namely the reduced, standard, and higher rate.

Applicable to passengers enjoying a seat pitch of less than 40 inches (1.016 metres) provided they are traveling in the lowest class of travel.

Applicable to passengers traveling in any other class of travel or where the seat pitch is more than 40 inches (1.016 metres).

Applicable to passengers traveling on board aircraft with a MTOW of 20 tonnes or more and a seating capacity of less than 19 passengers.

A passenger is considered to be traveling in a different class of travel if he or she receives a different level of service or enjoys a different standard of comfort or privacy.

However, passengers enjoying better seats do not travel in a higher class if they don’t pay extra for the better seat and if the better seating is available on a ‘first-come first-served’ basis (regardless of whether they select their seat at the booking stage or when they get on the plane).

To help you work out the correct rate of duty, we have created the following decision tree: 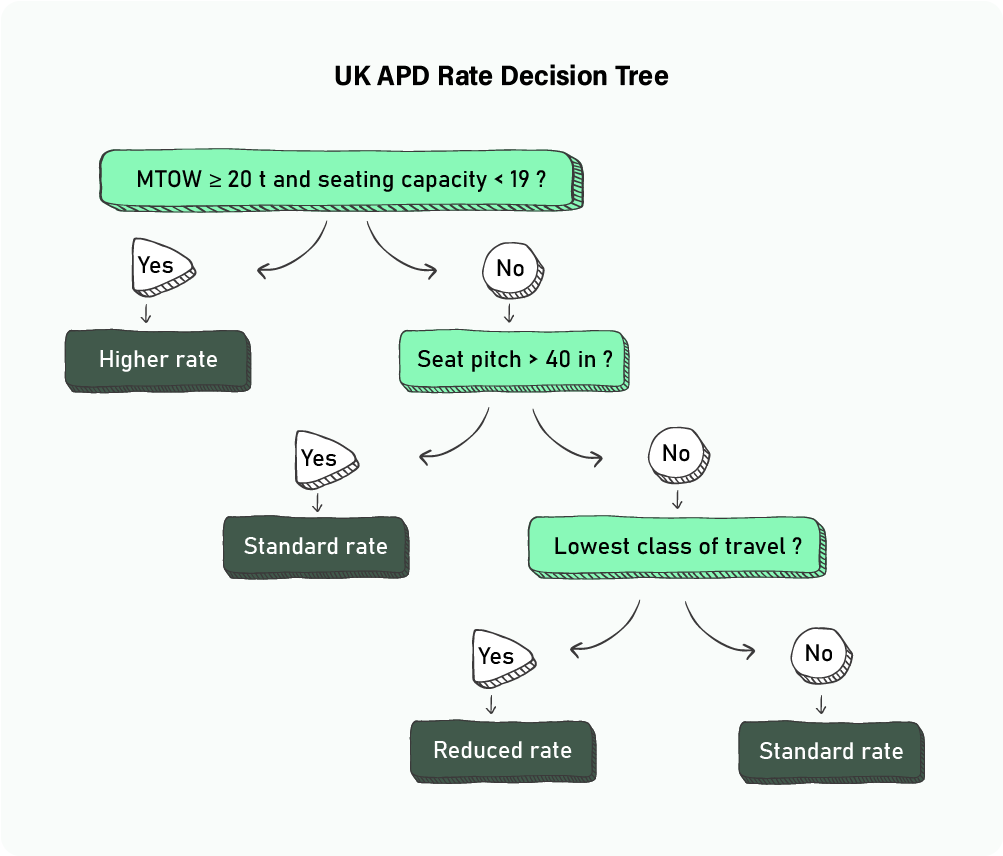 Seat Pitch and How it is Measured?

And for bench or side facing seats that face onto an aisle, it is the distance from the back-support cushion to where aisle space reasonably begins, allowing for enough leg space and leaving enough aisle space so that passengers can pass. 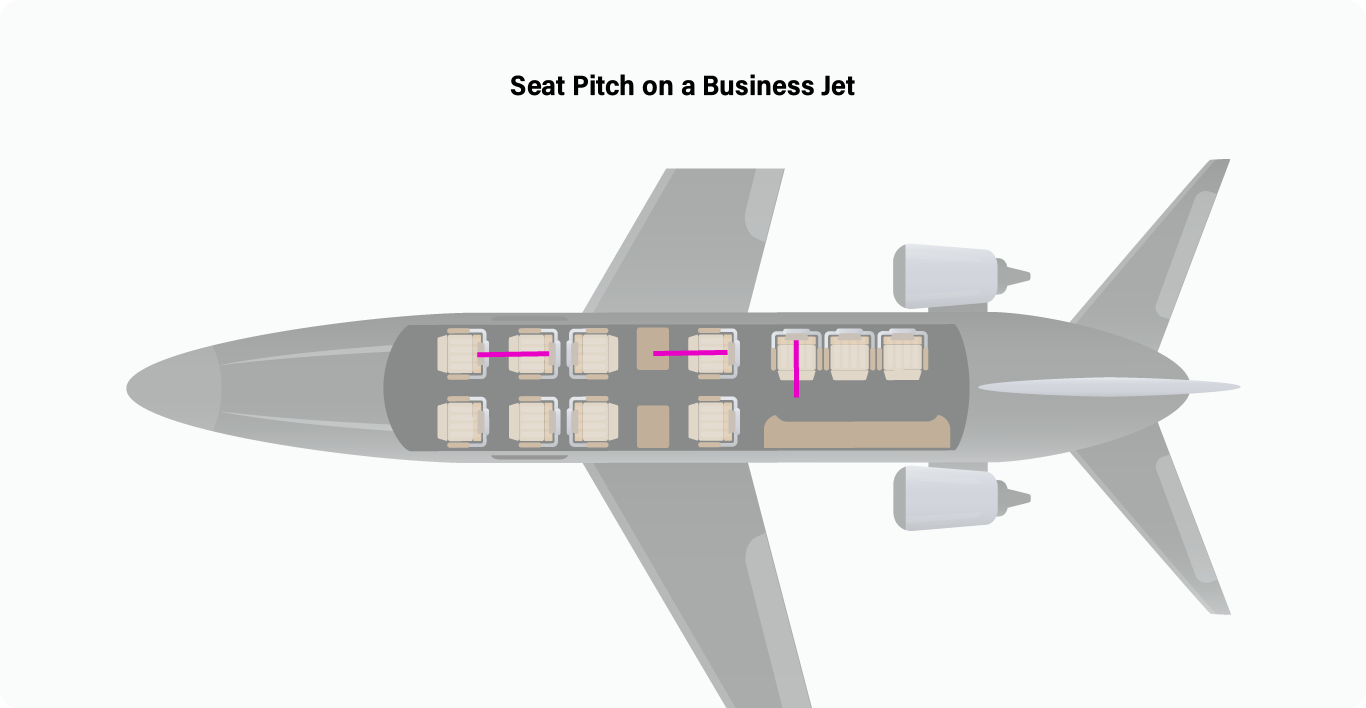 Three different rates of duty and 4 destination bands mean that there is a total of twelve different APD rates. The following illustration shows the APD rates from 1 April 2023. 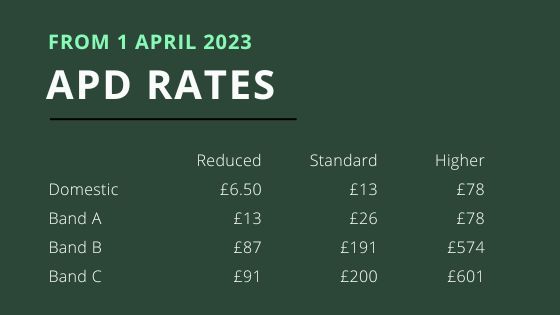 APD rates are re-assessed every year and are usually announced at the Autumn Budget at least a year ahead of coming into force.

To give you a better idea of what APD means in terms of costs for a single flight, we have calculated the total duty for three common scenarios: 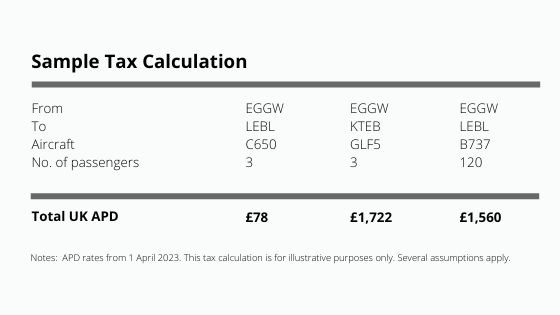 No APD on Direct Long-haul Flights from Northern Ireland

Those are flights where the passenger starts the journey in Northern Ireland and where the first (and maybe only) part of the journey ends in a country or territory assigned to destination band B or C. Any other flights from Northern Ireland, e.g. flights ending in a band A destination or (indirect) long-haul flights to band B or C destinations where the passenger connects at another UK airport or band A airport, are treated like any other departure from the UK.

Who Must Pay UK APD?

UK APD is charged on passenger transport services provided in fixed-wing aircraft with a MTOW of more than 5.7 tonnes (12,500 lbs). Taxed are both commercial and non-commercial flights.

The following flights are exempt from APD: 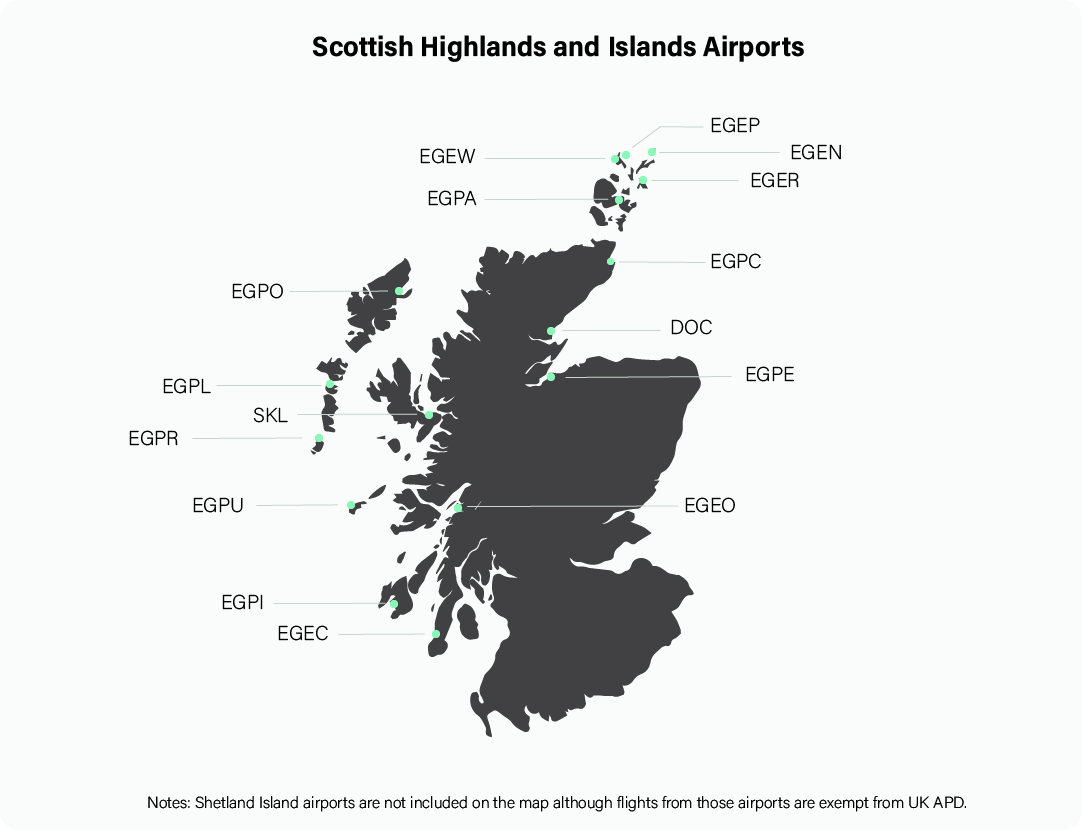 The following persons are exempt from APD:

What Are the Tax Obligations?

Unless you are exempt from UK APD, you have certain tax obligations. Among them, the requirement to register for APD, appoint a representative, declare and pay APD, and keep records and accounts.

Let us have a closer look at each of those tax obligations.

You must register for APD no later than 7 days of your first chargeable flight from the UK. The registration can be waived if you are likely to make fewer than 12 flights a year from UK airports and if your annual APD liability is less than £ 5,000.

However, you will still need to submit an APD return to HMRC within 7 days of that flight. This procedure is part of the Occasional Operator Scheme.

If you don't use the Occasional Operator Scheme, the registration consists in submitting Form APD1 by post to HMRC. The registration process is completed when HMRC sends you a certificate of registration. You should receive it within 28 days of HMRC receiving your application.

If any of the registration details change, you must tell HMRC within 30 days. By contrast, you have only 7 days to notify HMRC when your representative changes.

You must appoint a representative (such as FCC Aviation) if you are required or choose to register for APD and do not have a business or other fixed establishment in the UK.

There are two types of representatives:

A fiscal representative is authorized to represent your flight department in dealings with HMRC. It is jointly and severally liable for unpaid tax or any other claims brought against you in relation to UK APD.

An administrative representative also represents your company but does generally not assume any liability. Depending on your tax liability, you might be required to provide security before HMRC can approve the appointment.

HMRC will request security in the form of a written guarantee from a bank or reputable financial institution if your estimated APD liability over a 12-month period exceeds £25,000. The amount of security is 5 months’ worth of APD if you declare and pay APD on a monthly basis. By contrast, you have to lodge a security of 16 months’ worth of APD if you are on an annual accounting cycle.

APD is declared by mailing Form APD6 or a letter containing the same information.

As a registered aircraft operator, you submit your APD returns through HMRC’s online reporting system. It's important to note that you even have to submit a nil return in case you have nothing to declare.

APD is declared on a monthly or annual basis. The reporting deadline is the 22nd day following the end of accounting period.

If the return deadline falls on a weekend or bank holiday you have to submit your APD return on the last working day before the deadline.

If you wish to declare APD on an annual basis then you have to submit a permission to use annual accounting. It is important to note, however, that you only qualify for the annual accounting scheme if your annual APD liability is below £ 500,000.

If you have direct long-haul flights from Northern Ireland, those flights shall not be reported on your APD return. Instead, you have to report them by sending a separate spreadsheet to HMRC every three months.

If you use the Occasional Operator Scheme, you have to make a bank transfer payment within 7 days of the chargeable flight taking place. Use your unique reference number so that HMRC can correctly allocate your payment. If you have not yet received your reference number, you have to contact HMRC and request one.

If you are registered for UK APD, you have until the 29th day following the end of the accounting period to make payment. If the payment deadline falls on a weekend or bank holiday your APD payment must be with HMRC by the end of the previous working day.

You have to keep records and accounts (in paper or electronic form) that support your APD declaration for a minimum of 6 years, including:

What Are the Penalties?

If you fail to meet your tax obligations, HMRC may issue a warning of penalty or issue a penalty right away. There are different types of penalties for different offences.

You may receive a fixed penalty of £250 if you fail to:

If you fail to pay tax by the due date, HMRC may issue a geared penalty of £250 or 5 percent of tax, whichever is more. They may also charge a daily penalty of £20 for each day the offense continues.

Besides, penalties can reach up to 100 percent of your tax liability if you fail to notify HMRC of your liability to register or if you evade tax.

Ultimately, your final penalty depends on your behaviour. The penalty is higher, for instance, if the failure was deliberate or concealed. Did you know about the infringement and choose not to tell HMRC or did you take active steps to hide the failure?

By contrast, you can reduce your penalty if you come forward and tell HMRC before they find out (unprompted disclosure), or if you fully cooperate with HMRC during the tax investigation (so called telling, helping, giving).

Send us your questions and we'll get back to you within the next 24 hours.